The Peasant in UnderMine is the controllable Character the player uses to go on an adventure. When they arrive in the mine, they will meet Arkanos the Archmage, who wants to investigate the ongoing earthquakes, and where the Blacksmith has disappeared off to.

The player is always accompanied by their trusty Familiar, who helps them in various ways on their journey.

The players appearance can be randomly changed by using the Magic Mirror in Arkanos' Library.

There are three game save slots available, each with their own player character. After selecting "Play" from the main menu, the player can either select an existing game, if one exists, or start a new game, creating a new character. New characters are also created automatically after a character dies, and will receive half of the previous character's Gold, unless a Sewing Kit or Sack Upgrades are acquired or a run is completed. The character name and color of clothing, eyes, skin, and hair are chosen at random.

Character names are created randomly by combining parts from the following lists: 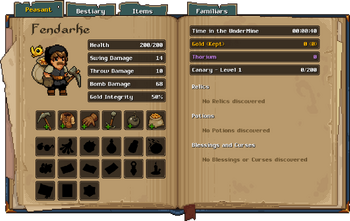 The player journal, with the peasant's stats and tabs for bestiary and the items
Wait peasant! Take that journal on the table.

After speaking to Arkanos in the Library, the player will be told to pick up their first Artifact, a journal, and cannot leave the Library until they have done so. During the game, the player can look up the peasant's stats in the journal, which contains information about their equipment, health, how much damage they can inflict, their speed and their gold sack's integrity. The player can open the journal by pressing Tab on their keyboard.

Players can also look up their stats and see which artifacts, potions and relics were collected or which blessings and curses they have acquired.

Peasant equipment can be upgraded by spending 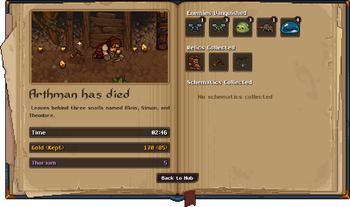 When a character's health is reduced to 0, they will die and respawn in the Hub as a new character. They will keep their journal but will lose some of their gold unless they found a Sewing Kit or reached the end of The Golden Core, which counts as a death. If the player speaks to Arkanos in the library again, he will offer some items in exchange for Gold. The NPCs will also mention in dialogue that the player looks a little different.

Note: Using the "Give up" option counts as a death, so it is possible to abuse it to gain these achievements. Be warned that a large amount of gold will be lost this way.