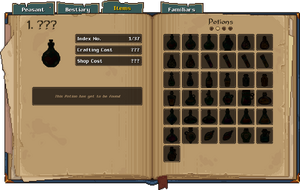 Potions are Items in UnderMine that are only usable once, and either have an effect duration like the Strength Serum, or make something happen once like the Chest in a Bottle. The Journal includes a section on Potions in the Items tab.

Potions with a duration stack the timers when drinking multiple of the same potion.